Shark leathers is an oft maligned company in my local bike community. When I got my Shark Velocity suit, I asked my Facebook track group for size advice. Their advice was mixed to say the least. Most ‘advice’ was something along the lines of ‘take it back, Shark is shit,’ or ‘go and get something else.’ They got a poor reputation from their ‘Faster’ suit range but are definitely turning things around of late. Having had the Velocity suit for a nearly a year and also crash testing it, I’m happy to say that my experience has been positive.

As I was getting more into track days and planning to race, it was time to replace my old two-piece with a race ready one-piece. I had been looking at Dainese, Ricondi and all the other big name brands. But Mrs OnTheBackWheel is a very sneaky. On my previous birthday she bought me a beautiful orange and white Shark Velocity suit. Score!

Having heard mixed reviews of Shark in the past, I have to say I was very impressed with the quality, plus the orange and white looks great. On closer inspection all the seams are properly triple stitched with nylon coated thread. There is metal protection on the shoulders, elbows and knees. There are replaceable elbow sliders and stretch panels in all the right areas. On the back is a hump along with a removable back protector. The leather is thick too. My initial thoughts were definitely positive.

Picking up the suit, the first thing I noticed is its heavy. Much heavier than my two piece Tecknic suit and my mates Ricondi. For this review I weighed it and it is roughly 5.9kgs. I don’t know the weights of other brands, but I believe this is on the heavy side and a little less weight would be appreciated. On the positive side, you know plenty of materials have gone into the suit, the leather is thick without being bulky and there is tons of padding throughout.

The front of the suit is perforated from the chest right down to the knees. In the heat of Brisbane this is a must have. On the inside, the liner is zipped in and easy to remove. This is handy if you sweat your ass off and want/need to wash the liner. The hump is replaceable. Its a simple case of undoing one zip and pulling it out, nice.

So how does it fit? Now its worn in, bloody good. I am not restricted by the suit in any way when riding. The perforations really work and are a God send on the track. I used the standard back protector once but took it out as I already have a Forcefield protector. It was very easy to remove if you don’t need it or just want to use it for street riding. 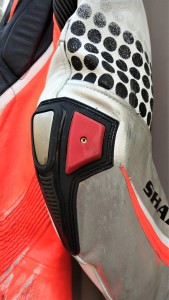 Initially the knee padding rubbed quite badly. After the break in period it is now fine but it is bulky and I would like more flexibility in the knees. Hopefully it continues to wear in over time. While slightly cumbersome, the knee protection is great. I smashed my right knee on the exit of bus stop at Lakeside and the suit held up tops, plus my knee is still in one piece. 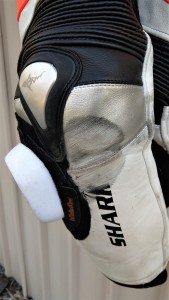 A gripe I have with the suit is it is too bulky in the forearm and shin/calf region. There’s just too much leather and material so it doesn’t contour to your body correctly. And its not because I’m a weirdly shaped individual, I’m relatively normal, I swear! It makes putting your gloves and boots on a bit of a pain. I am contemplating getting a leather specialist to alter this. The collar of the suit also rides up a little bit too much when in race crouch, but this could be for a number of reasons so I can’t complain too much about that. The thighs on the suit are a little tight, but I have chunky thighs and its wearing in with time. Overall the suit is a good fit that I expect to improve even more with time.

I recently had the pleasurable experience of crash testing the Velocity suit. I am happy to report that the suit held up brilliantly. I came off at roughly 70km/h and slid along the bitumen on my side and back. The leather got slightly scuffed and I am now down a elbow slider but everything else seems to be as good as new. All the seams help up and the leather hasn’t worn down.

Having a look on their website, the Velocity suits are still for sale but it looks like they are being replaced by a newer version so you should be able to get them cheap. Mrs OnTheBackWheel managed to get mine for $699 AUD, an absolute steal. At this price they are a damn good deal. The only other suit I can think of that competes in this price range is from Ricondi but they are listed at $1090. If you want to spend a few hundred dollars more its probably going to be a better fit for most people. But lets say you get a Ricondi for $1000, that’s still roughly 43% more expensive which is nothing to sneeze at.

In summary, I’m very happy with Shark Velocity suit. The overall quality of the suit is great and its saved my ass in a crash, literally! The only thing I don’t like is the bulky areas in the forearm and calf region but this should be fixed with a visit to the leather specialist. If you are looking for a suit thats well priced and good quality, don’t be afraid to check them out.