Word had spread that Aldi (I know, tight ass right?) did some decent motorcycle gear every now. Apparently the wet weather gear was well and truly worth a look. So the next time zee Germans had some in stock I went down and had a look. Looking at the riding gear more generally, I wasn’t very impressed. The quality wasn’t great and when you can pick up good gear for such a reasonable price it’s wasn’t worth it. The wet weather gear didn’t look too bad though so I snapped some up.

First impressions were good. It was a jazzy ensemble (in a dreary black/grey kind of way) and both the pants and jacket fit well. The pants were loose enough they fit easily over a set of jeans and boots but not so loose they flapped in the breeze. On the bottom of the pants was a zip and Velcro to tighten around your boots. The jacket has a zip down the middle, overlapped with material that Velcro’s down to keep the water out.  I’m 6 foot and found the length good, it has an elastic waist band to keep things snug and the collar comes up high enough at the rear to stop water running down your helmet and down your back. Looking at the gear, quality appeared to be on par with other basic wet weather gear I had seen.

I put the gear under my rear seat in preparation for that rainy day. One dreary morning it started to rain before work and I threw them on for the commute. 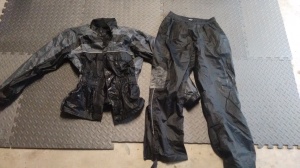 And they worked well. I didn’t get wet and had no issues. And this was the same the next few times I used the gear. But over a very short time the pants started to fail. Initially rain would seep through the stitching (especially the crouch area, no one likes shrinkage). The pants soon deteriorated to a point where they are useless in decent rain. My commute is roughly 30 minutes. If I were to do my commute in light rain the front of my pants would be completely saturated through by the half way mark. Scheiβe!!

A year and a half on and the jacket still works ok (I use it less frequently I must admit; in saying that I used the pants bugger all). But fick mich the pants are a letdown and just don’t last. I’ll try some Scotchgaurd as a last ditch effort but honestly I think it’s time to move on.

Overall I can’t recommend the Aldi wet weather gear. Those Germans can make automobiles but steer clear of their Aldi gear. The gear is supposed to keep you dry and it doesn’t. If you’re serious about wet weather protection, you are better off getting something that will do the job properly.

P.S Scheiβe means shit in German. Fick mich I’ll leave up to you.