Everyone now and again a man has to make sacrifices. Like volunteering your time to feed the homeless, or donating money to important causes you care about. In my case, I had to make the greatest sacrifice of all, selling my motorbike to pay for…things.

‘Where are your balls, OnTheBackWheel?’ I hear you saying. Well I’ll have you know they are in a jar on my wife’s side of the bed. I get to have them on special occasions…when she lets me. On a serious note, my MV was a hoot but it had some issues that shit me over time, namely the suspension. To fix the suspension involves replacing the fork internals and at the minimum getting the shock fettled with. If I was to spend that much I might as well buy a second hand Aprilia Tuono V4 and be done with it. Initially I was going to straight swap it for a Dorsoduro 1200, but that deal fell through. Then with an impending wedding and house extension it was time for a downgrade. I got out the .303 and put the MV out to pasture.

I wanted something in a similar class (fast and naked ;)) but within my budget of $4000 I couldn’t find jack all (that I wanted at least). I broadened my search and started to seriously consider an Aprilia Falco. I am a self-confessed Aprilia man and these looked like they could be right up my alley. But I kept hunting and saw the Cagiva Raptor 1000. I remember people talking about them when they were released. They ran the cracking Suzuki TL1000 motor and were a bit of a wild ride. I like wild.

As with a lot of things I like, there isn’t many around. There was a great looking one in Melbourne but once you factor in freight and registration my budget would be blown out of the water. I stumbled across a repairable write-off in Geelong that had been err…repaired. The bike was by all accounts pretty clean and completely ready to go bar the required inspection. I negotiated the price down to $2700, pulled the trigger and arranged transport. I don’t know if anyone has done this but its bloody nerve wracking trusting someone you’ve only spoken to over the phone with your hard earned. There were certainly a couple of nervous days when waiting for the transport company to pick up the bike. Thankfully it all went off without a hitch.

So, how was the bike? To start with it was a bit rough and in need of some good old fashioned TLC. Nothing crazy just some fresh oil, rearranging some wiring and a wash. Once this was done I was pleasantly surprised. Sure it had a couple of scratches, but these Raptors are a mean looking bike. It looks like its straight out of Batman. And who doesn’t like pretending to be Batman.

Sitting on the bike, the first thing I noticed is its bloody low. I’m no giant and I was sitting flat footed with both knees bent. If you have ducks disease, this could be the bike for you. The bars are also very wide and felt straight off a motocross bike (mine had aftermarket Renthals).

Now this particular Raptor had twin carbon Megacycle pipes and is one of the wildest sounding twins I’ve heard. I mean this thing wakes the dead. The engine wines and has a savage bark that is wonderfully offensive. The funny thing is, when you are riding the bike it doesn’t sound overly loud. It’s not until you hear someone else riding it that you realise it’s positively brutal…lovely.

Riding the bike, my first impressions were the bike didn’t want to steer. The rear sits so low it feels like I was riding a power cruiser. I was able to fix this by adding a new shock linkage from Lust Racing that raises the rear by 25mm. This helped the steering of the bike immensely and provided a vastly improved tip in. I highly recommend doing this.

The engine is great. Its torquey, has a fat mid range and pulls like a 14 year old boy up top. It is just a really fun, easy to use motor. Look, realistically it doesn’t stand up to the latest sports bike, but considering it’s essentially unchanged from 1997 it really is some achievement. The gear spacing was really good, but I ended up taking one tooth off the front sprocket. This really livened things up, giving it more punch and making power wheelies a twist away. I have a name to live up to after all.

The fueling on the whole is great. But the on/off throttle response is terrible. Do you remember those 90’s movies where the teenage daughter is learning to drive and bunny hops all over the place? That was me! 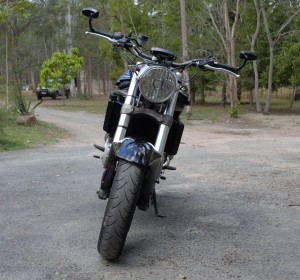 Seriously though, the initial throttle application had to be extremely gentle lest you startle the beast and make her buck. This was particularly important mid corner as it would upset the bike big time. This is ultimately due to a poor throttle position sensor that is notorious on Raptors. Thankfully it can be fixed by doing some relatively simple adjustments.

For average riding the suspension is pretty good. Unfortunately it shows its budget quality when pushed hard or ridden on rough roads. The shock wasn’t too bad, but I never felt confident with the forks. Under braking the forks would initially dive then really stiffen up overly so. The rebound is pretty much nonexistent. Thankfully there are some relatively easy mods out there (new springs, different fork oil, spacer mods) that can really improve the forks. People also replace the rear with an inexpensive Aprilia Falco shock.

The gearbox is silky smooth and the clutch pull light. You can really bang through the gears on this.

Suzuki really know what they were doing when it comes to gearboxes. Clutch-less shifting is a breeze too.

The brakes are a letdown. The rears do their job well but I found the front brakes to be wooden. The power was OK, but you really had to pull them in. Fresh fluid, new pads and a good bleed helped, but they were not up to standard. I would look at upgrading them with a fancy aftermarket master cylinder if you were keeping the bike long term.

The bike proved to be reliable. I did not have to do anything bar basic servicing. Engine parts are very easy to find as they are straight Suzuki. You will get into problems replacing fairing and unique parts though. Ebay and forums are your friends here.

The fuel range is terrible. To fill the tank to the brim takes 15 litres. And to make matters worse, when the bike had about 2.5 litres left it would run out of fuel coming up to lights or coasting. Expect 170km’s out of a tank. This is a shame as the bike has a pretty good riding position and light touring wouldn’t be out of the question.

When I first got the bike, I didn’t like it. It didn’t steer, the brakes were a pain and I just didn’t gel with it. But over time I made some adjustments to my riding style and the bike and grew to like the old girl. The thing really yanks out of corners and sounds great. It’s definitely a lot of fun. But I wasn’t sad to see it go. With my Tuono and Brutale they had qualities I felt I probably couldn’t replace. I just didn’t get this from the Raptor. It’s not a bad bike; in fact if you could pick up one in great nick for cheap I say go for it. Maybe it was because I had two very desirable bikes and downgraded, but I just feel that for $4000 or a little bit more there are better options out there (Aprilia Falco, SV1000 and others). Next!