Last Tuesday I was lucky enough to get out to Queensland Raceway and cut some laps with my fellow Kawasaki riders for the Kawasaki Ride Day. I stumbled across the event advertised on Bikesales, $50 for a whole day on track (if you were on a Kawasaki). Considering a normal track day is approaching $200, they were providing $25 in lunch AND I had the opportunity to test ride the latest Kawasaki’s, I couldn’t sign up quick enough!

I arrived at QR to find we had the whole venue to ourselves and powered garages for everyone, fancy. There were approximately 50 other Kawasaki riders and a huge variety of bikes ranging from the latest ZX6R and ZX10R track weapons, ZX14’s, track bikes, the cult Mach III 500 and even a KLR650! Most importantly, my pit neighbor Pete was on a H2…hnnnngggggg (to the H2 not Pete). 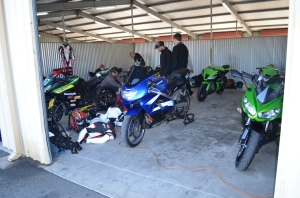 On arrival I got in line to book a test ride. Ultimate Motorbikes from Ipswich had the ZX6R (636), Ninja 300, Ninja 650, ZX10R and a H2! Even though I got straight into line, to my disappointment everything bar the 300 and 650 were already taken. Turns out Kawasaki boys are mustard, so having already ridden a 650 in the past I signed up for a ride on the 300.

I had an awesome time on the track and had some great battles. I even got to have my first kitty litter experience when I came into turn 1 too hot. I went to tip in and just knew I wasn’t going to make it so put it upright and through the gravel I went! Thankfully I was able to keep it upright but it certainly was a wild ride. Old mate on the H2 behind me said it looked impressive. Speaking of the H2, yes, it is as fast as they say. While I would have loved to have ridden one, I didn’t want to be that awkward weirdo asking someone if I could ride their $37000 bike. But I did have some battles with him and down the straights he would pull an easy 4-5 bike lengths on me.

For a change of pace I took out the Ninja 300 for 4 laps of the track and walked away impressed. There is enough grunt on tap for the bike to be fun on the road, it was comfortable and handled sweetly. I can see why they sell so many of them. I’ll give a more detailed test ride report in the future.

In regards to my bike, I’m loving it on the track. With some minor suspension tweaks (softened the rear compression and took the rebound out 2 clicks on the forks) the head-shake is now minimal and the handling is brilliant. The motor is amazing to boot and has no problem staying with the latest and greatest.

In the first session my brakes were spongy but after they heated up they were great for the rest of the day. The new Bridgestone T30’s were good, better than the Pilot Road 4’s they replaced but I still found their limit early on in the day. On corner exits you have to be very careful getting on the throttle or the rear loses traction. At one point when I was trying to keep up with some boys on slicks and got on the gas too hard on the exit of corner 3, the rear spat so hard I nearly high sided. Great fun, but at the end of the day the 10 is my daily and I don’t want to bin it! Still, the T30’s did a good job and certainly aren’t bad on track considering they are a sports touring tyre. I was able to run in the advanced group with no problems. Oh, and I’m now officially on the lookout for a track bike, I certainly won’t have traction issues running slicks!

The day was run by Formula Extreme (of FX Australasian Superbikes fame) and I was really happy with how they went about their business. You got a lot of track time (something that can annoy me about Champions) and they were relaxed yet professional. Kudos also goes to Kawasaki for putting on an awesome day; it certainly makes me want to stay in the Kawasaki camp.

I’ll upload some more photos of the day and you can expect a detailed Ninja 300 review in the near future.