On Monday there was a member of the fellowship of bikers who was officially pumped to start his journey to Phillip Island (I’d like to think I was Aragorn). But seriously, a 2 week motorcycle adventure with a MotoGP thrown in the middle? You but your mumma I was pumped! I packed my gear on Sunday night and gave my bike a massive clean so she could look fabulous at the Island (little did I know how dirty she likes to get, but that’s cool, I forgive her). I made a few slight alterations to the trip after speaking to mates, namely adding in the south eastern coast of New South Wales. Besides that we were sticking to our original plan and hoping to arrive at the GP on Thursday afternoon.

In regards to packing, on one side of my panniers I had all my clothing, a spare pair of jeans, trousers, 5 shirts, a couple of jumpers and lots of jocks. On the other side I had my camera, toiletries, camping gear, wet weather jacket and a few odds and ends. I chucked my sleeping bag in my biker swag, rolled it up and ocky strapped it to my pillion seat. I also attached my camping pillow to the swag with a further ocky strap. After saying my goodbyes to Mrs. OnTheBackWheel and OnTheBackWheel’s son, Sarg the Kelpie, I was off to meet the other members of the fellowship, my brother and new mate at Ferny Grove (Ima go with Gimli and Gandalf).

There is something to be said about starting a big trip. Food tastes better, the air is sweeter and life feels…good. Riding to Ferny Grove to meet the lads I was stoked that the trip was finally underway.

When we met we checked out each other’s set ups.Looking at my bike I noticed that in the 10 minute ride to Ferny Grove, I’d already lost my new camping pillow! A further inspection from my brother revealed that the camping pillow went out swinging, destroying my rear hugger in a blaze of glory! I thought I heard a small noise but didn’t think anything of it, turns out it was my camping pillow screaming ‘witness me!’ It got stuck between my wheel and hugger, snapping it and bursting free. But seriously, that’s a strong little bloody pillow; I’d hate to see the car that ran over it. I can imagine riding home at the end of the journey and seeing the burnt out remains of a rolled car on the side of the road with the little pillow that could sitting next to it untouched, laughing, waiting…Nevertheless, a couple of zip ties later and we were ready to rock with a plan to get somewhere near Armidale by days end.

We headed to Beaudesert and after about 45 minutes riding we officially missed our first major turn off! Not a good start, but shit happens, you wipe your ass and move on. We pulled over, had a quick look at Google Maps, doubled back and we were away again.
While the start of the trip was exciting, the roads were boring, motorways suck. That all changed when we passed Beaudesert and headed towards Mount Lindesay. The scenery went from dry, brown grass to change to beautiful green grazing land with rocky formations. The road started to twist and turn with sweeping corners. Passing Mount Barney the road really started to tighten up and was a bit of a goat track but after a short time became a fantastic road. We turned off at Rathdowney onto Running Creek Road, bypassing Woodenbong and headed to Kyogle. This was a brilliant road and one of the highlights of the trip for me. Imagine a mixture of open high speed sweepers and tight corner for 50kms *sighs whimsically*. Good times.

Heading towards Kyogle and fueling up we met another group of riders heading to the GP. It never seizes to amaze me how friendly bikers are to have a chat even though you have never met them before. It is just one of the many reasons I love riding.

We had a quick chat to them then continued on to Casino and Grafton. This set the tone for the trip, riding roads that were boring as bat shit to get to the fun ones. After the great scenery of earlier it was also a disappointment. The mighty ZX10 was also giving me an early warning of the painful pleasures she had in store for me over the next few days. Nothing a beer and pizza at Grafton while waiting for the rain to pass couldn’t fix though! On to Armidale.

The road from Grafton, through Nymboida and onto Ebor was without doubt one of my favorite parts of the trip. Why? The scenery is just ridiculous. Show me anywhere in the world and I’ll look at you with a face that says ‘That all you got?’ and bust out a couple of photos of the NSW northern tablelands during sunset. The whole way is littered with green pastures, gorges and waterfalls. More importantly it was full of great riding. The roads started out bumpy and moved into tight corners that opened up into flowing corners. Panniers were scraped and corners were taken, delicious.

Passing through Ebor I saw a sign for a waterfall on the side of the road and made a last second decision to turn in and have a look. I mean, how often do you get these kind of opportunities to just stop in and check out whatever you want? And I’m glad I did, because this was an amazing spot and such a great place to relax and stretch our legs.

While we were admiring the views, the sun decided to make a rapid departure and we came to the decision that while we hadn’t gotten as far as we would have liked, this would be a perfect spot to camp for the night after a feed at the local pub. We made our way to the pub and arrived at 7.17pm. We asked for a feed and a couple of beers only to find that the kitchen had closed at 7.15! The grumpy old publican wasn’t budging no matter how hard we tried so we had to be content with our beers. Gandalf was not happy.

I love old pubs, they are generally full of history (this one had old pictures and early milling gear on the walls) and great stories. We got speaking to a couple of locals who let us know that it wouldn’t be a good idea camping at the waterfall because the rangers frowned upon it. They informed us of a local free camping spot set up by the government in town next to a stream instead, beauty! This was the first of many times during the trip that I realised people can be awesome. This is exacerbated in the smaller country towns where folks are willing to offer help, directions or just have a yarn. After chatting with them and getting some takeaways, they showed us where the campsite was in their car, champions!

The campsite was an absolute pearler with dead trees piled up for firewood and old fire pits waiting to keep us warm for the night. If you need a place to camp for the night, I highly recommend it. We started a fire, shared some brews, rolled our swags out and had a kip in preparation for another big day of riding. Little did I know, Ebor was freezing and my shitty old sleeping bag didn’t quite cut the mustard…

I’ll continue our journey next week. For more photos from day one, look below.

In the mean time, Keep in OnTheBackWheel! 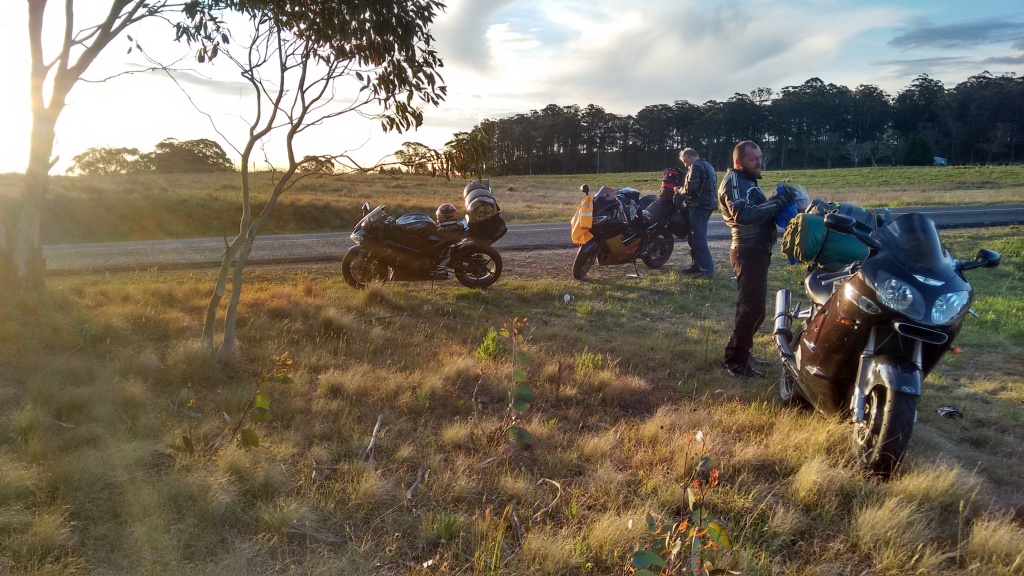