Well I officially froze on our first night. Note to self, wear jumper and long pants to bed when its freezing and you have a shitty sleeping bag. No joking though, there was frost on our bikes! This was all forgotten rather quickly when the sun started to rise and I realised what a beautiful spot we were camping in. NSW you may be no good at Rugby League, but you can sure put on a view.

We left the campgrounds and headed to Armidale with the hope of getting somewhere near Sydney by nightfall. Again the road was great, full of sweeping corners with numerous gorges, waterfalls and pit stops you could make along the way. In the future when I’m less pressed for time I’ll make a point of stopping at these. We had planned to get a bite to eat at Armidale but found nothing that grabbed our eye (whats with the lack of decent truck stops in country NSW?), so we fuelled up, cruised down the New England Highway and stopped in at Uralla. Uralla proved to be a hip little town with some nice cafés, definitely worth a stop in if you want to stretch your legs.

It was at this point that I realised putting my cigarette lighter under the pillion seat was probably not the best idea. Why? Because it’s hard to access! Charging my phone and GoPro was proving to be a major pain in the ass during the day. My panniers and swag were on top of the rear seat and everything had to be undone to get to the power socket. If you’re thinking of installing one I definitely recommend putting it towards the front of the bike or in an easy to reach spot.

The next part of the ride to Tamworth was pretty bloody boring. A classic highway slog. But, if you take the twisty roads everywhere it takes an eternity to get anywhere so we soldiered through. Plus, the thought of riding Putty Road in the afternoon was getting me excited in my naughty spots.

One thing that was starting to annoy me about NSW (and continued till we crossed the border) is their fascination with making every town, no matter how big or small 50km/h! Some of the roads were basically highways too! The only positive about this is being able to take your hand off the throttle to give your hand a rest as you slowed down from a 100. Ok rant over, let the story continue.

Arriving at Tamworth, Gimli decided to make a detour and stop in at the Powerhouse Motorcycle Museum and I’m glad we did. One, it was a welcome rest and two, bikes! Norton’s, BSA’s, Montesa’s, Ducati’s…the list goes on. They are all in fantastic condition too. If you’re in the area and love motorcycles I definitely recommend the stop.

We continued south on the highway towards Muswellbrook and boy was I glad to get there. The New England is a cruel mistress on a sports bike. Some serious bumiss-numbiss was starting to set in (along with painiss-wristiss and backiss-soress). We stopped in at the pub in the hope of getting a counter meal only to find we had just missed the restaurant hours again! We certainly weren’t having much luck getting fed on this trip. Luckily they still had beer and man did it taste good and help soothe those muscles.

At the pub we got some advice on the best way to get to Putty Road. A local told us that instead of heading to Singleton we should go towards Denham and turn onto Edderton Road (affectively trimming 20km’s off). And that we did, going around the coal mines. If you haven’t seen a coal mine, bloody hell they are impressive.

I managed to sneak a brief peak through the man-made barriers and they are shockingly big. Sure they may devastate the earth, but damn they are a sight to behold.

Riding in this area of the world I also came to the conclusion that if you aren’t on driving a Landcruiser you probably aren’t on the road. Well, maybe if you’re in a Hilux.

We continued our trek to the famed Putty Road on the Golden Highway. The scenery here was quite nice, especially considering that only a few km away there is a massive hole in the earth with numerous horse studs.

After a short jaunt down the highway we turned onto Putty Road and started what was without doubt one of my favourite parts of the trip, especially after what had been pretty much a whole day of highway riding. Just before the road got twisty we stretched our legs in preparation. I realised my Gopro was flat (fail) and proceeded up the hill.

And what a road it is! Tight, flowing corners, smooth tarmac, no runoff and rocks on the side of the road. Brilliant. And just when I thought it was over, it kept going! I was very surprised with how long the Putty Road is, I was expecting a short blast but it went on for a fair amount of time. It definitely shits over my local Mount Glorious, especially in turns of road quality.

Unfortunately our luck with the rain ended halfway between Putty and Windsor. We had to put up with a light drizzle for about an hour resulting in gloomy conditions and a slippery road. Still good fun though :). I can’t wait to ride that road again.

Arriving at Windsor and back into civilisation we searched for a pub and finally managed to arrive in time for dinner. One huge chicken parmi thanks! You got to love a good pub meal after a long day riding.

We came to the conclusion that it could be a good idea to get a hotel room for the night. We were wet and the weather didn’t look like it was going to improve. Plus, last time I checked there aren’t too many places to camp in Sydney. To our surprise the pub staff were amazing in helping us find a room for the night. They called several motels they thought were good and booked us in at Hawthorne. People are pretty awesome at times.

After a hot shower at the hotel I was hoping to get a good sleep. Little did I know that I would be surrounded by snoring in stereo! Boy this pair could snore. And something about snoring just really bugs me. I ended up getting the shits, taking my swag and sleeping on the balcony and surprisingly had a great sleep…

For more photos from the motorcycle museum, look below! In the mean time, I’ll be busy writing and hope to have another blog ready soon. Keep it OnTheBackWheel! 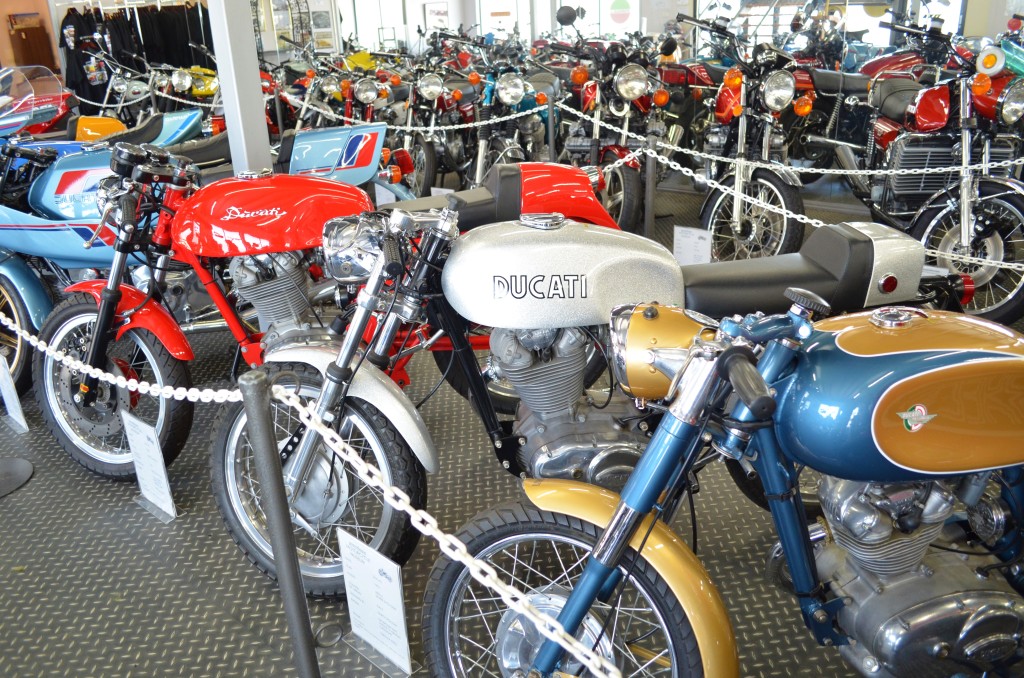