My Tuono was the equal best bike I have owned, I bloody loved it. (click here to read my review on it) Why only equal? I’d say my 2007 Tuono tied with it, I would have another one of them in a heartbeat! Having owned the bike for well over 3 years, I felt it was time for a change. I was loathe to do it as I still loved her dearly but there was some method to my madness. I wanted to start doing some adventure riding and my off road roots were calling me. ‘’Curtis, come riding on the dirt again.’’ The off road spirit whispered. “It’s super fun and there are some really cool bikes out now that would really suit you…’’ The Husqvarna 701 Enduro and SWM Superdual were just some of those bikes. Damn you off road spirit! Another train of thought, if I got rid of the Aprilia, I could always upgrade it to a newer 1100 model down the track when I wasn’t as financially challenged…see what I’m getting at? But, life works in mysterious ways OnTheBackWheeler’s.

Mid-year, Mrs. OnTheBackWheel applied for a job in the United States of America. Or as we affectionately call it, Murica’. And she got it! So, we decided to up ship, sell everything that wouldn’t fit in a few boxes and move for nearly 2 years. I would have loved to have kept the Tuono (I did have some brothers who were more than willing to “look” after it), but moving overseas is not cheap people, so on the market it went. In only a couple of weeks she sold and I only cried a tiny bit when she was picked up.

Now, the plan was to ride Mrs OnTheBackWheel’s Honda CBR250 for a month or two before we left. I don’t have a car so it was going to be my every day bike. Well the trip got delayed, so I ended up riding the bad boy for six months! And here’s the kicker everyone, I actually really enjoyed it…

We originally got the CBR a couple of years earlier for wifey to learn on. The price? A whopping $1000. I got it so cheap by chance. A car whole saler had it and he just didn’t want it. He had $1500 on it so I offered him $1000. Boom, deal. It had been involved in a minor off, but overall it was in good shape and a perfect learner bike. Sadly due to life, it didn’t get used much at all and just sat around. When it was my turn to ride it, I threw in a new battery, fresh oil and filter and a new spark plug. And that was it, she fired straight up! That’s a Honda for you.

Now riding the CBR250R. My first impression was, ”where the fuck is the power?” And secondly, damn this is easy to ride. I mean real easy. I loved my Tuono to death, but for commuting this thing shits on it. Don’t get me wrong, I would choose the Aprilia for every single task imaginable, but this thing is a just a doddle to ride and get around on.

The power? Perfect for a beginner, underwhelming for an experienced rider. The first time I took off in traffic, I thought I was going to die a slow and painful death! Litre sports bikes have really spoiled me. First gear is really short, I’d compare it to a dirt bike and it definitely took some getting used to. It’s a popular mod to shorten the gearing on these to get some more ”acceleration”, but I feel like that would be madness, it’d make first gear pretty well useless. You are forced to short shift into second or rev it out if you want to get off the mark quickly. Once you are in to second, third and fourth, it actually goes pretty good! The engine is grunty and fun to rev. I found it perfect for cruising around the city, commuting and the suburban style of riding I was doing out in Samford. In the hills, it’s really underpowered. Even small inclines sap the power and make you really wish you had 50 cc or more to help (*cough* CBR300 *cough*). I nearly always had to knock it down a gear to keep speed up a hill. I’m sitting at around 84kgs buck naked, if you are lighter, no doubt you won’t have as many problems, but don’t expect any miracles. 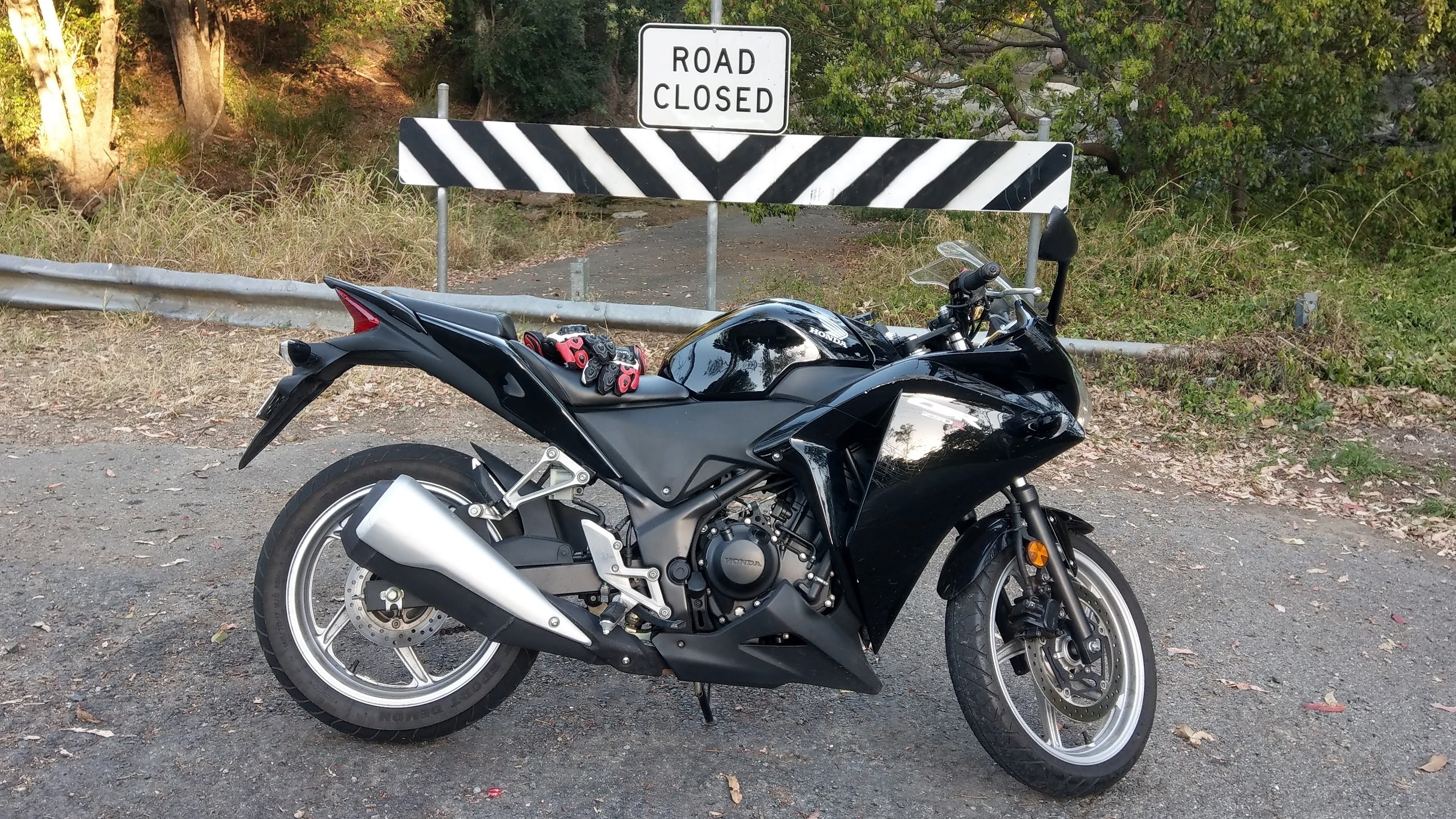 Overtaking? She’s good up to 120kmh but runs out of steam up top. I’ve gotten over 140 a couple of times comfortably, but I wouldn’t think there was much more happening beyond that.

A surprising admission for me, I found having a quiet exhaust to be a pleasant change. I was able to put my earbuds in and listen to a podcast or album on the way to work, and plot twist everyone, actually hear it! Speaking of sound, the engine actually had a great intake noise once you take the snorkel out of the air box. I pulled that out quick smart. Did it make a difference to power? It maybe had a slight improvement in response, but I didn’t notice anything else. The exhaust noise isn’t great, especially with a pipe. It you can get a quiet, light aftermarket exhaust I might recommend that, as the stock exhaust is an absolute boat anchor.

So how does the baby CBR handle? She’s a light bike to throw around, change of directions are telepathic and there are no surprises. The handling definitely keeps with my theme of ”easy to ride”. Moving onto the suspension, it’s good for standard riding, comfortable even. When you start to up the pace, things get a bit rude. The suspension is pretty rudimentary and non-adjustable. It just can’t keep up and gets overwhelmed by big hits, but that’s to be expected on a cheap bike.

I found covering distance on the mighty CBR pretty easy. The seating position (and seat for that matter) is great. You sit in the bike and the bars are at a natural, comfortable height. My 30 minute commute? Perfect. Longer trips? I had no issues riding for a couple of hours; things can get a little vibey at higher speeds, but nothing crazy and completely acceptable.

I’ll tell you this, going back to a faired bike was a good change. You just get so much more protection from the elements. In a light drizzle, you stay practically dry. I found myself whining slightly less in the cold too. Don’t get me wrong, riding in the cold sucks, but it was much more bearable on the CBR compared to the Tuono. It’s good to actually have wind protection too.

Now the brakes…yeah not great. Adequate is a word that comes to mind. The front needs a really firm pull and they just lack power. Maybe some better pads would help, but I’d say it’s just the whole package that’s to blame here. The rear? It’s ok. Rear brakes are pretty much only worth mentioning if they are bad IMO.

Some big plusses? Fuel economy is one. I was getting about 350kms out of a tank without even trying. Quite a pleasant change from the Tuono! It proved to be reliable as a hammer too. With over 46000km’s on the clock, she ran like new. I did have to clean out the fuel tank, but that was only because it had been sitting for so long!

So what do I think of the 2012 CBR250R? Overall, I think the baby CBR is a great run about and learner bike. Would I buy one as an experienced rider? Nope. Would I mod one? Nope, you’re better off just upgrading your bike. Did I enjoy riding it? You betcha.

I’m now writing this in August 2020 and the mighty little CBR was sold in December 2019, just before we moved. The new owner? A young fella who bought it knew absolutely nothing about bikes and he was going to learn on it. It seemed like it would be the perfect bike for him.

Until next time, keep it OnTheBackWheel…