Have you ever wanted something so badly it effects your daily life? I mean, so bad it eats away at your insides and you talk about it so much your wife starts to consider leaving you because you are driving her insane with you constant motorcycle chatter? One day I made the fatal error of test riding the Aprilia Tuono V4.

In 2012 I was getting my 2006 Tuono (click here to read about that bike) serviced at Springwood Aprilia. I had been there a few times and one of the staff recognised me. He said to me ‘Curtis, do you want to try out the new Tuono V4? We’ve got a demo bike here.’ I had purposely been avoiding this moment. All over the place I had been reading about how amazing it was. But destiny works in mysterious ways. ‘Sure!’ I replied, without thinking twice. Don’t judge me, I have no self control when it comes to most things two-wheeled.

Now you have to remember, I was extremely happy with my second gen Tuono. In fact, I loved it. It was absolutely beautiful and a fantastic bike. It was everything I wanted. But after test riding the V4, getting back on my V2 was bloody disappointing. I had to have that V4.

So I test rode the V4 all the way back in 2012 and ever since that moment I wanted one. In the meantime, silly Curtis decided to buy a house, then an engagement ring, get married and then blow valuable motorbike money on a house extension. The bike of my dreams would have to wait. But, after riding the Tuono V4 she held me in her sensual Italian clutches and never let go. At the end of 2015 and four bikes later I broke my wife’s resolve, half completed the house extension and started the search for another Italian lover.

I put the mighty ZX10 up for sale and to my surprise it sold in three days. It was a sad time, the ZX10 and I had been on some amazing adventures together. But, as soon as it was gone my search for an Aprilia intensified. At first, I was just going to bite the bullet and get a new Tuono 1100, but funds didn’t permit. I settled on searching for a second hand model with all the bells and whistles. I’d always wanted a yellow model (yellow is cool guys!) and after scouring the internet for weeks I found the one. 2012 model, only 2000km’s on the clock, RSV4 tail, Akrapovic exhaust, race ECU and of course, yellow. Perfect. But there were two issues. First up, the bike was interstate. Secondly, the bike had been crashed and fixed up. Normally, this would be too much of a risk for me, but after speaking with the owner at length on numerous occasions and doing my research, I took the gamble and got it shipped up having only looked at hi-res photos.

I’ll be honest, it was a nerve racking time waiting for the bike to arrive. Buying a bike without looking at it is not something I would normally do; let alone one that had been crashed in the past. When the bike arrived though, all my worrying had been for nothing. It was immaculate. I could have kissed the old bloke who delivered it. I’d finally made it people, I had my dream bike (insert teenage girl-squeal here)!

I fired the yellow devil up and everything was made right in the world…I’ve said it before and I’ll say it again, the Aprilia V4 is without doubt the best sounding bike you can buy. The bike has a deep tone with a staccato-like firing order. It is a beautifully mechanical sound and it positively snarls. I’m serious, its snarls. Imagine a really pissed lion. Rah rah rahhhhhh!!!!

Anyways enough about the sound, let’s get onto its looks. Some people think the Tuono is an ugly duckling, but I love it, especially with the RSV4 tail. Imagine a sexy cross between Wall-e and Bumblee. It’s unique and unmistakable. The bike just oozes quality too, from the swing arm, to the frame, paint and even the controls. It’s a sexy bike.

When you first sit on the bike, there are two things you’ll immediately notice. First, it’s quite tall, nothing crazy, but certainly noticeable. Second up is the seat. It’s stupidly hard. The actual shape is fine, but the foam is thin in all the wrong places. As a result, you sit on the seat frame rails. Your ass will get slightly accustomed to it, but if you’re not quite ready to take it in the bum, you’re going to want to change it.

I had better speak about the controls as there is quite a lot going on here. The traction control is changed by using a toggle with your forefinger and thumb on the left hand side of the bars. It’s a simple yet brilliant system and the buttons fall perfectly to hand. To scroll through the dash there is another toggle above the traction control. And lastly, to change the engine maps (Track, Sport, Road) you simply thumb the starter when the bike is running.

So how does it ride? Bloody awesome. The throttle response is lightning and the clutch action is light. As you take off, it’s a little soft off bottom but with a slight twist of the throttle things get moving very quickly. The mid range is fantastic and one of the motors strong points. The way the mid range punches out of corners is absolutely addictive. In addition, the top end is a screamer until the upper reaches where it flattens out. By that time though you’ve already quick shifted into the next gear and warp speed is engaged. This is a seriously quick bike.

As I mentioned, the throttle response is brilliant. It’s not without its faults though. Track mode has a slightly snatchy on/off throttle. This upsets the bike when trying to apply the throttle mid corner. I frequently find myself concentrating on regulating the throttle and not riding. Sports mode is perfect in this regard. Its butter smooth yet still lets the bike go mental when you yank it. I find the engine braking easier to use in sports too. In a perfect world I would have the on/off throttle characteristic of sports mode and the sheer wow factor of track mode throughout the rest of the RPM’s. Ultimately though, sports mode is the best map and I use it nearly all the time, there is still the same amount of power on tap but the throttle response is easier to manage. And the road map? Who cares, I didn’t buy a 170hp missile to putt around in the girliest setting!

The handling of the bike is excellent. This thing is every bit as good as a sports bike and that’s not an exaggeration. It is just so stable at all speeds. You can change your line at any time, even mid corner. The only area where I find the bike isn’t brilliant is quick changes of direction. This would be an absolute demon on the track where you’d only lose out in top speed because of the naked bike aerodynamics. On the street it keeps up (or is faster) than anything. 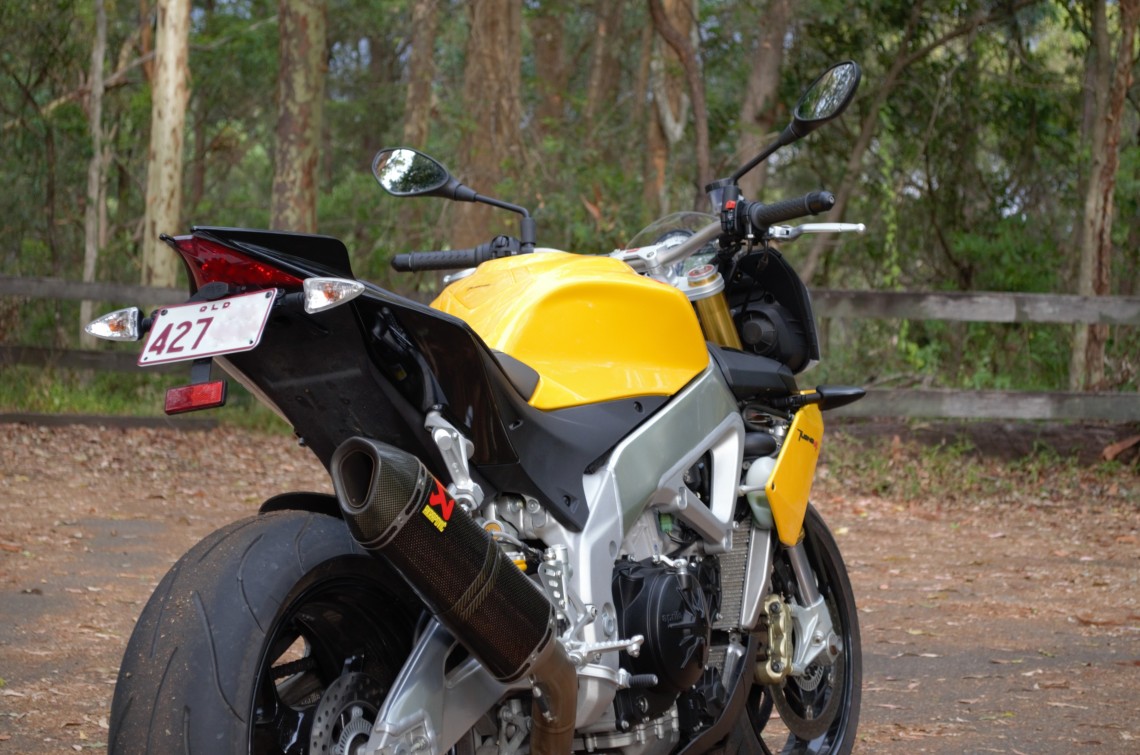 The riding position is pretty darn good, especially when you consider this is essentially a sports bike with upright handle bars. The bars are wide and in quite an aggressive position for a naked bike. The rear sets are pretty much RSV4 spec and somewhat high. I find it perfect for my half hour commute, day rides and mountain blasts. If you were looking to tour on it, I’d look at throwing on the new Tuono 1100 seat (it’s comfortable and fits straight on), some Aprilia Mana bar risers and lower the pegs an inch.

I’ve heard some people complain about the brakes, but they are bloody good. A common mod is to install a radial master cylinder to take them to the next level. They have solid power and feel but I may do this in the future because, why not?

The suspension is high quality stuff but it is too hard at times. Once set up it is very good but don’t expect a magic carpet ride, the Tuono is sports bike stiff. Bumpy roads can shake you to bits and it’s made worse with the ridiculously hard seat.

The electronics are an absolute highlight for me. I love technology and it’s been implemented so well on the Tuono. The traction control is imperceptible until you are well out of shape, the quick shifter is an absolute hoot and now I’ve had wheelie control it will be hard to go back to something without it. The wheelie control is too intrusive on the upper two settings, but the lowest setting is nearly perfect. It allows you to still have a play and get the front up, but doesn’t let you get too crazy. I would like a 0.5 setting so I can be a bit crazier though ;). While the launch control is bucket loads of fun, it’s most likely no one will use it. I’ve only used it a couple of times and its insane.

The bike does have a minor down fall (depending on your needs) and that’s the tank range. The spec sheets say that it’s a 17 litre tank, but Aprilia are dirty rotten liars. The general consensus is its roughly 15.7 litres. The reserve light comes on between 155-165km’s and I’d be very nervous if I went past 200km’s. I average roughly 7.5litre/100kms, not terrible, but certainly not great. For someone like me who commutes roughly 57kms a day and does weekend rides its fine. If you wanted to do longer journeys it will limit you and require greater planning.

I’ve owned the bike for over a year now and only had one reliability hiccup, a burnt out stator. This is a very common problem that I was prepared for; thankfully it has been fixed on later models. Besides that the Tuono has been trouble free and as cheap to run as any bike I’ve owned.

What do I think about the Tuono? It is everything I dreamed about. This bike will do 10.5 second quarter miles all day (even though it has the aerodynamics of a brick), sounds insane, doesn’t give me a sore back and wrists, keeps up with anything on the road and makes my mundane commute a blast. I’ll gladly put up with filling up every 190kms for some time to come.

So where do I go from here? I honestly don’t know. There are lots of bikes that I would like to own, but nothing I’m going to replace the Tuono with any time soon. Sure, the 1100 is a better bike and the 2017 model will be even better, but this is a keeper. Considering I go through bikes like hot dinners, these are strong words.